A paper describing the follow up on the first 10 patients has been accepted for publication in the Journal of Interactive CardioVascular and Thoracic Surgery.

Following the completion of the initial clinical trial the Clinical Practice Committee at the Royal Brompton Hospital has approved the device for use in the treatment of suitable patients with a dilated aorta due to Marfan syndrome.

There is a paper on the PEARS project in this month’s edition of the European Journal of Cardio-Thoracic Surgery. Called “Unknown unknowns: the aorta through the looking glass”, it was written by Tom Treasure, Tal Golesworthy, Warren Thornton, Michael Lamperth, Raad Mohiaddin, Robert H. Anderson, Steve Gallivan and John Pepper. Visit the European Journal of Cardio-Thoracic Surgery’s website to read the article in full. 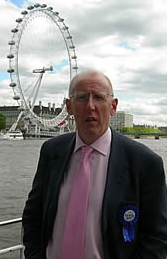 The project to introduce the ExoVasc® Personalised External Aortic Root Support reached an important milestone last month when the first patient to receive the ExoVasc® support – inventor Tal Golesworthy – celebrated the fifth anniversary of receiving the implant that pioneered the procedure.

The occasion was marked by a gathering in London on 22 May that was attended by ten of the nineteen patients who have now received the ExoVasc® implant, together with members of their families, surgeons and members of the company.

Proposing a vote of thanks at the celebration, Professor Tom Treasure spoke of the advances in cardiovascular surgery that made this type of procedure possible and commended Tal Golesworthy for his ingenuity. Professor John Pepper paid tribute to all of the patients who had entered the trial to pioneer the procedure. In his address, Tal Golesworthy thanked the many members of the team of people that had made this advance possible.

Tal Golesworthy and Peter Gibson attended the Marfan Information Day at St George’s Hospital London earlier this month with an exhibition to illustrate the ExoVasc® Personalised External Aortic Root Support. At this valuable event organised by the Marfan Association UK, we had the opportunity to speak to many families with members facing aortic root surgery, who were keen to learn more about the benefits of the new approach that is the subject of the current clinical trial at the Royal Brompton Hospital.

A further two patients have been included in the clinical trial of the Exovasc® Personalised External Aortic Root Support in the last seven weeks and a further patient is scheduled for surgery in the coming week. Progress in the trial is dependent on the number of suitable patients with Marfan syndrome who are referred to Professor John Pepper at the Royal Brompton Hospital and are suitable to receive their ExoVasc® Personalised External Aortic Root Supports, and we are encouraged to add several further patients within a short time. The experience with all of the recent cases is that surgery is relatively short and patients do not require cardiopulmonary bypass.