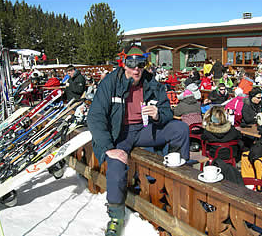 The picture opposite is of myself at Courchevel skiing (well, eating actually) in February 2009. Even in 2002 I was not sure whether it would be safe to ski, given the likelihood that I would be having a composite aortic root graft and the Warfarin anti-coagulation therapy that goes with it. It was actually the fear of permanent anti-coag, not the surgery, that drove me to pursue the Personalised External Aortic Root Support idea to the exception of almost everything else.

I have been in Research & Development my whole working life (but in Combustion and Air Pollution Control). To conceive of the idea of an external support was easy: there are any number of armchair inventors about. To build technical and commercial teams, raise the finance, run the project AND volunteer to be the first patient was not so easy, particularly as I was trying to operate as a rational project manager when I knew the outcome of the project could have such a profound impact on my future health. I was, and probably had to be, obsessive about the project and had to fight on any number of fronts to drive it along fast enough to benefit from it personally: in 2000 my aortic root was already at 4.8 +/-0.2 cm.

Anyway, after the race of my life, I became the first recipient of my own brainchild on 24 May 2004. All credit to John Pepper who performed the surgery, unrehearsed, with great aplomb (I have seen the video).

I did write a diary of my experience immediately after leaving the Brompton Hospital in May 2004 but… a hard disc crash on my laptop means said diary is locked away in Silicon heaven.

So my view now? Well, I take no prescription drugs, in particular I am not dependent on anti-coagulation. I am living a life so “normal” that all the usual banalities have crowded in to irritate: work, money, the health of other family members, etc, but I have a freedom and emancipation that only an experience as profound as cardiothoracic surgery (or similar) can bring. Nothing frightens me any more, I feel able to express myself without let or hindrance and I can live as I will. That does not mean that I do not give due consideration to others: by and large, I do…

My goal now is to drive this project on, as part of a well sorted team, so that other fellow Marfans have a choice of surgical options.

I have to thank Tom Treasure, without whose open mind, none of this would have been possible.