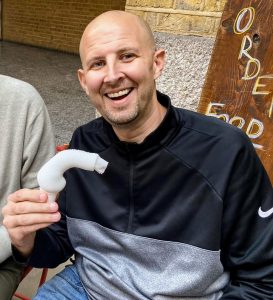 Where do I start? My name is Ray Matthews, and I am currently 40 years old, the same age as when I had my surgery in September of 2020. I have known I had Marfan Syndrome since about the age of 14. I was taking three different types of blood pressure medication for preventative measures. Despite this, my aorta had grown to 4.5cm by 2019. My cardiologist, in Houston, Texas, USA, recommended that it was time to start looking into surgery options. Having known that this day was coming, I had already done plenty of research and was already convinced that PEARS was the only option for me.

My cardiologist was hesitant when I told him that I wanted the PEARS procedure as it (at the time of writing this) is not approved by the US Food and Drug Administration (FDA). Regardless, he was very helpful throughout the process as he wanted me to get the dilated aorta repaired. The next step would be to reach out to the team at Exstent and London Bridge Hospital to ensure that I would be a candidate for this surgery. Throughout the entire process, everything was done via phone and email. I never met the team until I went in for surgery.

After sending over medical paperwork and a few calls to London Bridge Hospital, it was determined that I was eligible for PEARS. Now began the battle with my American insurance company to try and get them to cover the procedure. They originally denied the claim, but I appealed and presented them with the great success stories and cost savings of the surgery. Finally, after a few months, they approved the surgery! The only downfall was that I would have to pay for it out of pocket, and they would then reimburse me. Overall, it was still a great success that they agreed to pay for surgery abroad.

I was originally scheduled to have the operation in June of 2020, but a little thing called Coronavirus happened and ruined all of my plans. The surgery was postponed indefinitely. Needless to say, I was pretty bummed out as I had already booked the flights and hotel for my entire family. We were planning to make a little vacation out of it as none of us had ever been to London before.

Throughout the entire time, I stayed in touch with Yvonne May and Suzanne O’Connor, two amazing people who made the process so much easier. Thank god for these two ladies, I cannot express to them how grateful I am for everything they did for me. Around July of 2020, I received an email from Yvonne letting me know that the surgery was back on, and it was scheduled for September of 2020. I was ecstatic and sad at the same time because my family would not be able to join me and I would have to quarantine for two weeks in London before the surgery. Despite this, I booked my flight and was ready to go.

When I finally got to London, I quarantined for two weeks and got a message stating that they wanted to move the surgery up two days sooner…great news for me.

My surgery was scheduled for 7pm the night of September 23rd. I checked into the hospital that morning and went through a battery of tests, X-rays, chest shaving, etc. Through it all, I was pretty calm as this is what I flew 5,000 miles for. I was ready to get the surgery over with. Right around 7pm, they rolled me back to the operation room (theatre), gave me some anesthesia, and I was out for the count. The surgery was a success. It lasted about two hours, and I was even able to speak with my wife back in the States post operation, but I have no recollection of this at all. Now looking back, that whole day leading up to the operation seems like a blur.

I woke up in intensive care (ITU) feeling pretty bad. The analogy of getting hit by a truck is pretty accurate. There were plenty of drugs to help with the pain, but you still feel it. There are tubes in your chest, arms, and neck which limit your movement in the hospital bed. I was actually able to get up and sit in a chair for a little bit. It’s amazing how weak your body can get after a surgery of this magnitude. I spent most of the day trying to sleep as I was feeling completely “out of it.”

I was still in ITU. The pain was still there, but the majority of the pain was concentrated in my back, shoulders, and neck. I had zero appetite and couldn’t stomach anything as I was feeling very nauseous. I would take a bite but immediately feel like I was going to vomit. I just stuck with drinking water. Once again, I got out of bed and sat in a chair for a while. I even got up and walked around for about ten minutes. This was extremely tiring as my body was so weak. Another thing I noted was that I was feeling depressed. I was questioning my recovery, how I compared to others, and if I would ever be the same. This depression was something I had never planned for. They finally removed the tubes from my neck and chest. This was a great feeling. Later that evening I was moved to the regular ward with more patients and fewer nurses.

I had a little more appetite and was feeling a little less pain, but I was still feeling very down. I really just wanted to take a shower so that I could wash off all the iodine, sweat, and just see if that would help me feel better. When I finally got to take a shower, it was like everything changed. It completely revitalized me and helped boost my energy, boost my sense of well-being, and boost my appetite. This was like a miracle shower. I walked more that day than the prior two days combined.

Another shower and I began to really start feeling a lot better. I probably walked over 30 minutes that day. I was sleeping better, eating everything, and really starting to see the light at the end of the tunnel.

My final day in the hospital. My vitals were good, my energy level was good, my mood was so much better, and my appetite was almost completely normal. I walked probably 45 minutes to an hour. I was going up and down stairs with the help of the physiotherapists. I felt so much stronger and so much more secure in my ability to recover. After some final tests, I called a taxi and was on my way back to my London flat that I had rented.

Every day, after leaving the hospital, I was out walking, trying to heal, and build up stamina without overdoing it. I was in constant contact with Mr. Conal Austin and with nurse Suzanne O’Connor. I even spoke with Tal Golesworthy, the inventor and original patient multiple times. I stayed in London for about two more weeks before being cleared to fly back to the United States. Once you have this surgery, you become part of the PEARS family.

I am now three weeks post-surgery and recovering quite well. I plan to return to work here in about three more weeks. I want to thank the whole team (Conal Austin, Tal Golesworthy, Alan Rayner, Suzanne O’Connor, and Yvonne May) for making this surgery possible during the Covid pandemic. I cannot thank them all enough for everything they have done.

Anyone reading this who is thinking about or planning on having this surgery, please know that this is the surgery of the future. You get to keep all your own parts, probably won’t need to use a cardiopulmonary bypass machine, get to avoid a life of Warfarin/Coumadin, and will probably not need another follow-up surgery as so many do with the David Procedure. The recovery time is extremely fast. Just do what the doctors and nurses tell you, and you will be on the fast track to recovery. Feel free to reach out to me with any questions and/or concerns you may have.