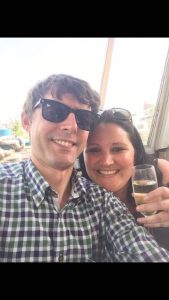 My name is Martyn Jones and I have known about my Marfan Syndrome diagnosis since I was 6 years old.

I have always had the eye problems associated with Marfan’s syndrome and I am a regular patient at Moorfields Eye Hospital.  When I was growing up my doctors used to tell me that I might need heart surgery when I was in my mid-thirties in order to deal with a potential dilated Aorta.

Now at the age of 34 it appears they got the timing spot on.

In September 2016 I went for my regular heart check-up at Northwick Park Hospital where it was discovered that my ascending aorta had dilated to 4.5cm from 4cm the previous year. A great consultant called Dr Gareth Rosser spoke to me about the concerning measurements and decided that it was best to refer me to Harefield Hospital, where I was put under the care of Mr Fabio De Robertis.

I had a meeting with Fabio in January 2017. He explained to me very clearly that I would need an operation at some point to deal with the enlarged aorta but wanted to schedule a more detailed CT scan in order to get more accurate measurements. I had the CT scan in April 2017 and it actually showed that the ascending aorta was dilated to 5cm rather than 4.5cm (measurements can vary depending on the method used to obtain them). As a result, Fabio advised that I needed an operation as soon as possible and set about discussing my options with me.

Fabio introduced the traditional approaches to deal with my situation but none of them appealed to me. At my age I didn’t like the idea of needing a further operation in 10-15 years and I also didn’t like the idea of taking warfarin for the rest of my life. He then explained the PEARS procedure and I thought that this option was perfect for me. Fabio kindly arranged another meeting with him and Professor John Pepper (an expert in relation to this type of procedure) to discuss the operation in further detail and Professor Pepper even brought some samples of what the mesh was like.

During this time I also gave Tal Golesworthy a call, who was very kind to speak with me about the surgery and put my mind at ease regarding what to expect during and after the operation.

In order to make the bespoke aortic mesh, I needed to have a further CT scan towards the end of June and the great team at Exstent managed to make my Personalised External Aortic Root Support in time for my operation date of 20th July 2017.

I was patient number 114 and Fabio De Robertis carried out the operation at Harefield Hospital along with Professor Pepper and Mr Ulrich Rosendahl.

I remember waking up in intensive care with my fiancée and family around me. I remember that there was still a breathing tube in my throat which a nurse came to help remove (this is normal) and I felt that my chest was very tight (not unusual after heart surgery). The nurses advised me to try and take deep breaths. The first day after the operation is mostly spent in and out of sleep. You can’t really remember much of it due to the anaesthetic but from what I do remember I felt pretty comfortable.

The next day, I was taken to the High Dependency Unit where I was under the care of the most amazing and thoughtful nursing staff. It is quite difficult at this stage to move around but because of the morphine clicker you are given you feel fairly comfortable and not in too much pain.

By day 3, I was encouraged to walk to the bathroom with the assistance of the nurses. The first time you stand up and try to walk is quite difficult but after a few tries it becomes easier. The best description I can give at this stage is that your chest feels wobbly.

I was discharged from hospital on day 6 as I had to stay in for an extra day due to a spiked temperature.

To prepare for the weeks after the surgery I suggest that you buy a V-Shaped pillow so that you can sit up and sleep in bed. I couldn’t lie on my side in bed until 8 weeks after the operation and I don’t think it is a good idea to try lying on your side until everything has settled down.  Other items that I found helped included, button up shirts, baggy clothing, slip on shoes and straws.

It is now 30th December so I am 5 months post operation and I feel great. My scar is healing well and any discomfort from the sternum has pretty much disappeared.

At this stage I still need to be a bit careful about what I do (no rollercoasters for instance) but I know it won’t be long before it feels like none of this ever happened.

I am so grateful to Tal, Fabio, John, Ulrich and the amazing team at Harefield Hospital for the excellent care they have provided to me and my family. This operation has given me the opportunity to enjoy my future without worrying about my aorta and I recommend that anyone interested in this procedure should speak to fellow patients so that you can be as prepared as possible for your recovery. For me it really wasn’t as bad as I thought it would be.