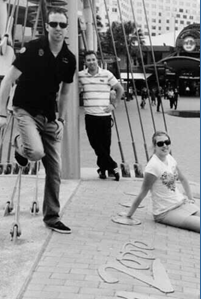 Life can be easy for some and hard for others. Why not make life easy for everyone regardless of the situation. Well here is a little story/feedback on what happened to  me, so I thought it would be good to share with others on my experience.

As you may find out I live in Adelaide – South Australia which most of the people would say that health system is up to date and that we have a decent medical system compared to a lot of other countries. Well let’s talk about my dilated aorta problem.

In 2011 I was told I required surgery and my aorta was rapidly getting larger. The biggest shock of my life at the age of 21 was when I realised this was major surgery. It had put me in a very difficult position in life as I thought my life was never going to be the same. I had to stand up for myself and do some research as the surgeons told me I had to get it done within 6-8 weeks approx as they thought it had already reached a dangerous size of 4.9-5.0 cm. Me just being me, I never really liked the way doctors and surgeons treat people sometimes as we are just another one. I decided to go and do some research and  thought there has got to be another way of doing this rather than replacing my aorta as my valve is still fine. I was researching on the internet and some how came across the Exstent-Tal Golesworthy story. It seemed interesting to read so I thought let’s see what it’s about. I kept reading and realised this could be a better option and a potential life saver. So I decided to get in touch with the Royal Brompton Hospital in the UK and a friendly member of staff directed me to the right person.

But there was one problem. It is in UK and it had to be paid upfront out my pocket.

Once I had an estimate of the treatment cost, I went to my cardiologist and asked him what he thought about the idea. His instant response was ‘seems like a very good idea, if there is anyway I can help I will do so.” And I decided to go with the procedure. So my cardiologist sent all my previous aortic scans to Professor John Pepper and all the info that we needed to start the process.

I flew over to UK at the end of September 2011 to be scanned and get the implants made. On the day at hospital I was very happy to meet Tal Golesworthy as he greeted me like family. He was there to explain the process straight away so there was no confusion or waiting around. I had an appointment with the surgeon and we confirmed everything and then I waited for the implant to be manufactured. Within nearly 2 weeks I was called in for surgery.

The surgery was done on 16th October and I was out of hospital on 21st October. All I remember is that on the day of the surgery I had a great team of people that made me feel safe and made sure that I didn’t worry about it too much as it is hard when you don’t know how its going to turn out.

In the morning I was taken into the theatre and there were giggles and next thing you know I woke up not feeling a thing. So I saw a nurse standing nearby and asking me if I am feeling ok, and I said has the surgery been done? She smiled and said “yes, glad you’re feeling well, we are going to have to take out your drain tubes now”, which was not the best part, but definitely something that is a relief once taken out. Once this was done there were lots of other things attached to me and I was in a high dependency ward. I remember Professor John Pepper coming to visit me to see if I was ok and how was I feeling, which put hope into me that everyone is with me here and I will be ok. As minutes, hours and days progressed I was going through different stages of pain. But at the same time I was progressively getting better and breathing and walking was getting better. The nurses and doctors were very happy with my recovery and I was released on 21st October which was 4.5-5 days after surgery.

I had to stay for next 5 weeks for recovery and check ups to ensure I was fit to fly back home to Australia.

I will be always thankful to Tal Golesworthy for welcoming me to the Brompton Hospital like family, and always being in touch with me to see how I was and believe it or not he still emails me even though I am on the other side of world. We also had lunch together a few days before I flew out of UK which I will never forget. This is a life experience for me, and a rebirth after which I hope to live a healthier and longer life without any problems in future.

Also very thankful to all the staff at Brompton Hospital that looked after me and not to forget Professor John Pepper – Thanks a lot again.

I am back in Australia – been travelling around Australia, as well as working full time again and enjoying life hassle free.