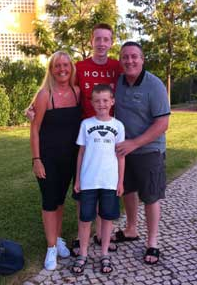 FIGHT for what you believe is right: by Sam’s mother

My son has marfan syndrome. He was diagnosed when he was 5 years old and, we have always gone for his yearly check-ups on his heart. He is now 16 years old.

On the 10th March we got the phone call to say Sam needed surgery. OUR story begins.

We went to see our consultant in Manchester and he explained about the surgery which was valve sparing root replacement so they booked him in to have surgery in Liverpool for the end of May. It was a big shock to us all. Sam was just about to take his first year college exams, to which the impending surgery was added pressure.

Once I got my head around it I started doing my own research on what was involved in the valve sparing root replacement operation. I was so scared; it was a 7 hour operation and so much involved, I stayed up for nights researching, when just by chance I came across the PEARS operation. I was so amazed about everything about this operation. It was just a 2/3 hour operation and my son’s valve would not be cut and stitched but would have a support around it to stop it from dilating any more. I got in touch with my consultant asking about the PEARS operation, they said they knew nothing about it and the valve sparing root replacement operation was the best for Sam.

My gut feeling kept on telling me I needed to keep fighting for what I felt was right for my son. I got in touch with Tal and Professor Tom Treasure. I felt I was getting somewhere but still my consultant was not happy with us making our decision on going against them on what they said was best for our son.

It took another 3 weeks for them to finally send a referral to St Thomas’ Hospital London to Conal Austin just to see if Sam was suitable for the PEARS operation. The day came when Conal Austin himself rang to say Sam’s aorta would be suitable for PEARS.

Sam’s operation took place on Wednesday 27th July, the nurses were amazed at how fast Sam was recovering, they even had him sitting up in intensive care brushing his teeth. By Wednesday evening they moved him to the High Dependency Unit and Thursday morning he was moved to the ward. The drain was the most painful but this was removed on Thursday evening and, once removed, Sam was only taking paracetamol. Sleeping on his back was very uncomfortable and it helped having a rolled up towel to place in front of his chest when needing to cough or sneeze. Monday morning Sam could come home. Sam went walking daily with his brother who was a big help. He didn’t have much of an appetite but did drink lots of water.

He got his first year college results and he got 3 A’s and after 8 weeks Sam was back playing basketball.

We can’t thank everyone enough for all the help and support especially Tal, Tom Treasure and Conal Austin.

If anyone wants to contact me I would love to help.