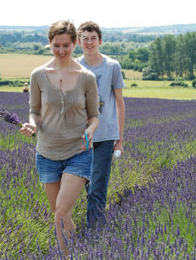 When I was 13 my dad, two brothers and I were diagnosed with Marfan’s Syndrome. My dad required immediate surgery as his aorta had reached a shocking 70mm without detection. Although this made the news of the diagnosis more frightening, he recovered quickly and cheerfully and I saw the benefits of his mechanical valve and was reassured. We went for yearly check-ups as a family to Harefield hospital and I was made aware that I may need a similar operation in the future, though to me this seemed many years away.

Over time I learned more about the condition and didn’t feel at all restricted by it but enjoyed everything I had as before. As I got older I was told of the implications that it might have for me if I were to have children. I found this upsetting but still felt that this was something that concerned the future, so didn’t let it trouble me.

My aorta had been steadily growing as I grew and I was sent for an MRI which confirmed that I needed to have an operation as my aorta had reached 47mm. I received this news in January 2012, just a few days before my father was due to go into hospital for his third major operation. This news came as an unexpected shock to me and I didn’t feel ready for it. Whilst discussing the different options, all of which would seemingly demand that I take a year out of University to recover, the ExoVasc procedure was mentioned, a newer operation which was far less invasive and required a shorter recovery period.

I left the appointment with a lot to think about but returned to University for my exams. Unfortunately my dad’s operation had not gone smoothly and worries about him and his recovery clouded my mind. In March I went to visit Professor Pepper at the Royal Brompton where he told me more about the ExoVasc operation. I will be forever grateful to him for his kind and reassuring words and I left the appointment assured that this was the right decision.

As time went by I had little time to give the operation a second thought, trying to balance my university work up in Nottingham with coming home as often as I could to visit my father whose recovery wasn’t progressing well, though we were ever hopeful. He died on the 1st of April and though as he said, his first operation had given him an extra six years he would not otherwise have had, I am so grateful that I had another option without the complications that he suffered.

Over the next few months I had an MRI and CT scan to create my own special ExoVasc and I met the surgeon who would be doing my procedure. Like Professor Pepper, Mr Rosendahl was disarmingly reassuring and I felt in such safe hands. I also discovered the Exstent website shortly before my surgery and was so comforted to read the previous patient experiences.

The next time I returned to the Brompton in July was for my operation. Professor Pepper had arranged that I could have it at the beginning of the summer so that I would be recovered in time to return to University in September. When I arrived there were no beds available so I was placed in a private room for the night. This was a very nice surprise as it felt like I was staying in a hotel, though I was dismayed to see poached eggs on the private room breakfast menu which I would not be able to have as my operation would be first thing. I was woken up early in the morning to have a shower and was taken down to theatre with my mum and aunt alongside me for support. Surprisingly I was not worried or too afraid as everyone was so nice and made me feel very relaxed.

I don’t remember much upon waking apart from being told that everything had gone smoothly and that my loved ones were there with me. I passed an uncomfortable first night in intensive care but the staff were very kind and I was moved to HDU the next morning. Things gradually became clearer, though I was still uncomfortable with the drains and the line in my neck. On my last day in HDU I received an unexpected visit from Tal Golesworthy which was a lovely surprise. His special visit and dedication to following each patient’s journey made me feel very privileged to have had this procedure.

As the lines and attachments slowly but surely began to be taken away and I was moved to the general ward, I felt a lot more comfortable and was able to talk to other patients. Although still very tired, I was regaining my appetite – I found the menus very exciting, even though there were no poached eggs! The removal of the chest drains was the most painful thing I remember, but once they were gone I was able to move around, free from attachments and it was the most wonderful feeling! I was able to explore the hospital, even taking the stairs. By the end of the week it was considered that I could go home but a final Echo was needed for which I had to wait until Monday. A week after being admitted, I was then able to go home.

It was wonderful to be back home and in my own bed. The day by day improvements were amazing: I couldn’t sleep flat on my back for a while but each night I would slide further down my pillows until eventually I was sleeping flat and on my side. I was out and about the next day and just continued to improve. I went on holiday with my family to Ireland in August where we went walking and I felt I could walk as far as ever.

I spent the rest of the summer catching up on Uni work and headed back in September for my final year. I went back to the hospital in October to have a small procedure to remove a stitch that was rubbing under my skin but it was very quick and simple. Once this was done the wound began to heal completely and after that I was back to swimming, cycling and even playing Quidditch at full strength. The scar is very neat and small and it is wonderfully liberating to feel safe in the knowledge that I have this protective stent.

The whole process was made so easy for me in a time when everything else was so difficult and for this I will be forever grateful to Tal, Professor Pepper, Mr Rosendahl and all the wonderful staff at the Royal Brompton.