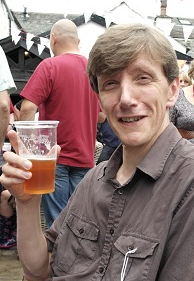 I am reasonably fit and have loved playing badminton to a good standard all my life.

I first found out that I was suspected of having Marfan syndrome only 1.5 years ago. My first aorta scan was 4.5cm, but I didn’t really understand what that meant.

One year later and my next scan was 5cm. This was a shock as I was told I would need the operation now, up until then I had thought the operation was maybe years in the future. I was told to stop playing badminton and referred to a local cardiac surgeon. By then I had done some investigation into the ExoVasc procedure and fully expected my local surgeon to give me that as one of the options at my appointment. But I had to bring up the ExoVasc option, as only a root replacement was offered. The local surgeon’s opinion was that he had not heard anything about the ExoVasc operations recently and therefore would not recommend it, but said he could refer me if I wanted to.

The benefit of not having to take Warfarin (and the inherent risks from blood thinners) with the inconvenience of having to have my blood tested all the time swung it for me. Also just the laymans logic of supporting my own tubing rather than cut and replace with an artificial ascending aorta just seemed like a no-brainer for my circumstances.

Not an easy decision to make against the advice of your local expert but after a great deal of thought, I decided to be referred to the Royal Brompton and so far (2 weeks post operation) I think I have made the best decision.

As other people have said, I had to make a few trips to London for consultations and MRI and CT scans.

Eventually the day arrived and I travelled down on the Tuesday afternoon for my operation which was scheduled for first thing Wednesday morning.

I came round after the operation early Thursday morning, but only remember a few things about that day, I didn’t feel bad but think that was due to all the morphine.

Friday in HDU (high dependency unit) was not a good day, what with all the drainage pipes and how bad I felt. All that day I didn’t think I would ever recover enough to go home in a week. The walls had a pattern on them (in my head) that kept scrolling. I was told the walls had no pattern, drugs huh.

Friday night, I didn’t sleep great but managed to control the hallucinations with my eyes shut. By doing this I could imagine flying over forests zooming in to see branches in great detail. I also tried star systems which ended up turning into clouds and kept me amused whilst I cat napped.

Saturday morning I started to feel a bit better. I think as other people have said, having 3 drains removed, leaving me with just one helped me to feel more human.

In the afternoon I was moved from HDU to my room, amazed at how much difference 1 day can make.

Each day after that I started to feel a bit better and bit stronger. One strange sensation was that my whole heart was wobbling around with each beat. I was told by my surgeon that this was due to the membrane surrounding the heart, which had been cut and therefore it was free to move more. I was told this membrane would heal in a couple of weeks.

I was discharged after 6 days. With my sister I got a taxi to Euston and the train back to Manchester and a taxi home. Long day but good day.