I am not a fellow Marfan sufferer but I do share one of the conditions. I have a dilated ascending aorta. A key cause of dilation is hypertension in some individuals and or a result of a fibrillin deficiency (no aortic samples were sent for testing because my aorta is intact).  I came across an article some time ago titled “Engineer Who Fixed His Own Heart”. I did not read it because it sounded un-plausible as after all I am an engineer too and would not fix my own heart. However some ten years ago after experiencing visual disturbances, clinicians queried migraines and I was sent for scans. The CT scan showed that I had a dilated ascending aorta, leaving me at risk of aortic dissection.

I saw a number of cardiologists and over a ten year period the aorta had dilated from 47mm to 55mm (a critical dilated aorta measurement by all research). After consulting Prof Alistair Royse, a cardiothoracic surgeon, the current options were limited and it was clear that if I did not do something and I had a tear or rupture, my chances of survival would be very low. I was not keen on Open Heart Surgery and I could not accept that I would need to take Warfarin anti-coagulation therapy thereafter. So as a good engineer, I did a risk assessment and had to deal with reality. The desire not to be on permanent anti-coag meds drove me to investigate alternatives.

About the same time I became aware of the Personalised External Aortic Root Support (PEARS), through the internet and recalling the above mentionedarticle and finding the Exstent website, Prof Royse attended a conference at which PEARS was discussed and which was attended by the recently appointed Australian distributor. Alistair and I spoke about PEARS and we decided to investigate this option further. I required another CT scan for up to date measurements of my aorta for the production of my 3D printed aorta and subsequent PEARS sleeve production. 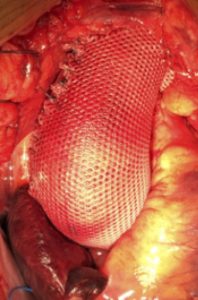 I became the first Australian recipient of my own PEARS on 26 September 2018. Credit goes to an international team from UK (makers of the PEARS), New Zealand Proctor – Adam El Gamel the head of the cardiothoracic unit at the Waikato Hospital in New Zealand and Australia (Prof Royse and the Melbourne Private Hospital’s (MPH) doctors and nurses). The picture here is of my PEARS taken during surgery.

I was in hospital for 6 days following the procedure but surprisingly, I was able to walk within hours of returning to the ward, which I feel, was a great outcome. The chest pain post-surgery was well managed with medication, coughing was a challenge. I initially found it difficult to sleep laying down and finally found a comfortable position sitting up for extended periods due to a lung infection. I experienced a febrile episode on the third day which was managed with medication. Despite some drama my overall experience was a very positive one.  I was treated very well by the nurses in ICU and in the ward, my surgeon and cardiologist visited daily, my vital signs were constantly monitored and my lung infection and febrile episode were treated promptly.

For me there are some noticeable differences post-surgery such as feeling and hearing my heart beat at different times of the day but most noticeably when I lay down at the end of the day to go to sleep (but this may settle with time). The sternum was secured using the Sternalock 360 sternal closure system which can also be felt when laying down. The Sternalock 360 has many advantages one ofthem being that I could resume driving after only 4 weeks with a pillow between my chest and the seat belt.

I now have rehab twice a week and will continue to do so until the end of the year as it’s important to exercise the muscles after having your chest opened. Prior to surgery I took prescription meds for high BP and heart rate. I still take prescription drugs for BP and heart rate but no anti-coagulation drugs and the potential complications associated with them.

My views on life have slightly changed because of the cardiothoracic surgery experience and I have an increased appreciation for the help and supported that family and friends have provided. I feel that I have mitigated or at least significantly reduced the future risks associated with a dilated aorta.

My goal now is to tell as many people as will listen that PEARS is a very viable option now and for the future and I want information to be made available to help other patients to make an informed decision – it made a big difference to have this option available to treat my condition. I encourage any person with a dilated ascending aorta to look up the most recent data on the internet using PEARS as the search criterion or go to the Exstent website, and if in Australia to make arrangements to discuss options with Prof Alistair Royse at Melbourne Private Hospital.

I have to thank the UK team (particularly Tal Golesworthy, even though I have not met him, yet) that started all this, Prof Adam El Gamel the New Zealand Proctor and the Australian team including Prof Royse and the other doctors and nurses and Melbourne Private Hospital.