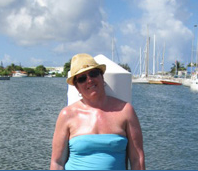 Back in February 2005 I was preparing to go to India on holiday. On my second to last day in the office I was sitting on the floor, filing. I reached up to get the next box down and felt a huge pain in my back. I thought I had pulled a muscle. So I sat there feeling strange, my heart beating fast, feeling sick and clammy. “This is no pulled muscle,” I said to myself. So I packed up my stuff and, carrying a gym bag and various other accoutrements, I went along to the local walk-in centre. I explained my situation, told them I have Marfan Syndrome and they gave me the angina spray to see if that helped. It did a little, but not as much as they expected. They asked me questions whilst we waited for an ambulance.

When I got to my local hospital I again explained I had Marfan Syndrome and I showed them the Marfan card that mentions dissections etc. I was still having what felt like back pain rather than chest pain. They gave me an x ray and found I had quite a big dissection in my descending aorta. I was asked which hospital I would like to go to as they couldn’t deal with me there, so I chose Bristol as my husband works there (we are from Swindon). Cue a blue light trip down the M4, trying to get hold of my husband to tell him to meet me at the Bristol Royal Infirmary, and hoping that I hadn’t missed him and he had passed us on the motorway going in the opposite direction.

After some initial problems of finding a bed in ICU, and then trying to stabilise my blood pressure enough to be able to stent me, I got MRSA. So they had to postpone the stent operation whilst they cleared me of the bug. After 3 weeks in hospital, I finally had the op where a double stent was inserted into my descending aorta through the left femoral artery and I was finally home a week later.

I was having yearly appointments at the Marfan clinic in Oxford, where they kept an eye on the diameter of my ascending aorta/aortic root as well as my stented descending aorta. I was told when my ascending aorta reaches 4.5 cm in diameter an operation will be needed due to my previous dissection. In most people they would wait until it reaches 5cm. I was also having follow up CT scans at the BRI.

It was after a scan at Bristol in December 2010 that the Drs decided I needed an operation on my ascending aorta. They wanted to do the traditional Bentall op on me but I had heard of Tal’s ExoVasc and that it was a quicker op, with better recovery, and no long term warfarin etc so I asked if I could be referred to the Royal Brompton Hospital.

Eventually my appointment came through in June 2011. “Great, I am gonna get fixed this year,” I thought.

So I trot off to London to see Mr Petrou and he says: “Yes, no problem. You are a good candidate for this operation, but I have a job offer in Oxford. Would you like to have the op there or in London?”

Thinking of my family and visiting, plus the travel time for getting back home after the op and the potential pain / discomfort I might be in, I chose Oxford, not knowing that it would be another year before the operation went ahead. Not Mr Petrou’s fault, but the bean counters that run the hospital had to approve things as mentioned in Nic’s story (2012).

So after a lot of chasing the hospital I got a date in July….“yippee,” I thought. I phoned the hospital on the day before to check they had a bed and “phone back later” was the reply I kept getting. Finally, at about 5 pm, I was told to come in as early as possible and they would do everything in the morning.

Early the next morning I got the train to Oxford, got to the hospital and met a very nice Dr who started the form filling and pre op admin tests, none of which I had had previously at Oxford though I had done some when I went to London.

I even got to see one of the assisting surgeons who talked me through it all and I signed the consent forms. Then I got told: “It’s not going ahead today”. I was annoyed and rather fed up but what can you do?

After borrowing some money to get back home – I had taken none, as advised, not even my house keys, so I had to hope someone would be in at my mum’s when I got back to Swindon.

A new date was scheduled in August. This time there were no hitches. I was in and had a bed. I went down for the op on Friday morning at 9 am and after trying the 95% stent and my body not liking it, they went with the 100% one and it all went well. Yay 🙂

Saturday, as is the way of hospitals these days, I was up in a chair for most of the day and even had a brief walk around the ward. Sunday, drains and catheter out and more walking. Monday we did climbing a flight of stairs and I had a visit from Tal, who was pleasantly surprised at the speed of my recovery. Tuesday was sent home – amazing.

Friday I was suffering from some pain by my right rib cage and breathing / coughing was painful so to be on the safe side, when I was at the Drs surgery for the stitches to be taken out of the drain sites, I asked about the pain and was told it was most likely a bit of fluid left and that the more I could walk and breathe normally the quicker it would go, but to be safe they sent me for an x ray. The nurse who did the x ray showed me the result, so I got to see what my descending aortic stent looks like and my insides look like they have a layer of chicken wire in them 🙂 but the result of the x ray was, yes a bit of fluid – keep moving. By Monday I was feeling a lot better as we had gone for a long walk over the weekend – long by post op standards. 🙂

Since then recovery has been great, started off doing not much in the first few days at home but on the weekend, we had a little walk to the end of the street and back (not as far as it sounds). Sunday we went a little further, and by the end of the first full week home I was doing the whole length of my street. The week after I was very slowly walking up the hill at the end of the road. The week after that I was walking for about 30-40 mins to go and see my mum (lovely brother giving me a lift back). The next week we had a trip to Wales planned as a holiday and I even managed a 6 mile cliff walk. After about 7/8 weeks I returned to exercise classes, taking things very easy at first, and in November we went on a long haul flight for a well deserved holiday.

To anyone out there thinking about having ExoVasc surgery, GO FOR IT!!

Many thanks to Tal, Mr Petrou and the staff at the John Radcliffe CTW.

PS. I was 44 when I had the ExoVasc and 37 when I had my first dissection.

PPS. I now take only 75mg soluble aspirin as opposed to the bucket load of Beta Blockers I was taking prior to the operation.