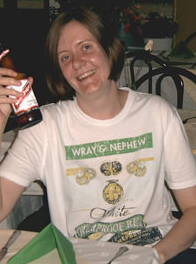 My name is Emma Barker and I am 23 years old. I have Marfan syndrome, and have always known this to be the case. My condition has never really affected me in any negative way, as my sister, father, uncle and two cousins also have the condition. I have never felt in anyway different to any of my friends or family.

I never really worried about having the condition whilst growing up, and although I had my lenses removed quite young, it never really seemed an issue to me. It was just who I was, and my aortic route measurement was kept a close eye on annually through Dr Anne Child at Saint George’s Hospital, Tooting in London.

Eventually when I hit my late teens we began to realise my own, along with my sisters and my father’s valve measurements were expanding, and it was thought surgery would be advisable sooner rather than later. Although my uncle Martin had his valve replaced many years ago with a tin valve, and was doing well, he was on Warfarin, something that scared me greatly. Having a piece of tin implanted in my body was certainly not something I wanted either. After talking to Dr. Child she advised me of another operation involving I believe either plastic or animal fibre instead of tin. She then set up a meeting for me and my father with a surgeon to discuss the matter further.

I can’t really remember much about the meeting, only leaving with it clear in my mind that nobody was going to remove my aorta and replace it with anything. The very thought filled me with great fear, and I certainly did not want to spend the rest of my life on medication and fearing that something might go wrong, which was quite possible. So from this I decided I would just let nature take its course. I feel that my father had similar ideas too.

It was a little while later, through Uncle Martin, that Dad showed me something about Tal Golsworthy, who also had Marfan and was a brilliant engineer. He had created the ExoVasc, as well as undergoing a operation to fit the ExoVasc around his own aortic valve. Again, my memory is a little vague, but I remember we were all very excited about this new way of dealing with the aorta problem.

From here, Dad started emailing people, and getting prompt responses. They were undergoing experimental operations and were looking for volunteers. Obviously, my father wanted it done first before he would let me or my sister. So that is what happened.

It all seemed to happen rather quickly and all I remember is my dad being in his high and humorous spirits the whole way through. He made it seem like a walk in the park, he recovered so quickly and nobody could quite believe it. I was determined to be patient number three, the first female and the youngest at the time. I felt excited and proud to be a part of this making of history, and also helping to give people a better quality of life. This was something great!

I asked the team if they would consider me, and they decided, yes, they would. Eventually my mother and I went up to London for my MRI. I must admit, the night before, I had just got off the ship I was working on and had drunk a lot of brandy and only had little sleep. (Of course I neglected to tell anyone this before the scan as that was exactly the opposite of what I had been told to do.)

When I got to scanning department I finally got to meet the genius that is Mr Golsworthy, and immediately felt very comfortable and reassured in his presence. We spoke and I felt I had absolutely nothing to worry about. Finally, I adorned my Kung-Fu suit (gown) and I got into the scanner and laid back to listen to my favourite music, and the occasional voices telling me to breath in, hold, and breathe out, all very simple. After the MRI, Mother and I joined Tal for some lunch, where they told me they got a very clear image, one of the best so far. (Hmmm, brandy?) After lunch and much talk I knew I was ready, they said it would be around three weeks from then, so I went home, and waited.

The day came fast and, together with my mum and dad, we made our way up to The Royal Brompton hospital. I was subjected to all the pre-op tests and seen by a succession of professionals. I felt confident that I was in the best hands possible and I could not have asked for a better team of medical experts. My operation was first thing in the morning, so I got rid of the ‘rents for some much needed shut-eye, and looked forward to the pre-med in the morning.

When I awoke after a surprisingly good sleep, I showered and prepared myself, with the support of Mum and Dad, I got this pre-med thingy and was rather disappointed that nothing seemed to be happening. That is, until I got to theatre and had a fit of the giggles, whilst they were trying to put something in my arm. I think they got a little impatient as I couldn’t keep still, so they must have knocked me out because the next thing I remember is waking up in intensive care, with a tube down my throat. (I had been warned about this previously, it was the thing I was dreading most of all, but it was actually OK). My parents were there and I felt fine, I drifted in and out of sleep and don’t remember being in pain. I really “woke up” when they moved me to the high dependency ward. Although there were lots of things attached to me, I really have a competitive streak and wanted to walk before the time Dad had, so I insisted they took me for a leisurely stroll around the ward. This was a little difficult, but it was good to get up and stretch my muscles (and beat Dad’s record!).

The next day, after I had most of the lines and stuff removed, I made my mum take me to the shower. What a luxury that was, I felt very good afterwards. I managed to do some more walking, and was already starting to feel stronger. The physio came to see me and was very impressed by my progress. Hopefully, I would soon be discharged.

Unfortunately, I developed a slight temperature, so I had to be kept in for a few more days and given intravenous antibiotics. My temperature finally came back to normal, and they discovered I had a slight reaction to the blood transfusion, which is not uncommon. I was very well looked after during my stay in hospital, due to such wonderful staff, but was glad to get home in my own bed.

After getting home, every day I felt better and better, and was glad that I chose to have this operation, I could finally relax and feel safe. If it was not for this procedure, like I said before, I would not have had surgery and would probably have constantly worried about the consequences. Now when I hear of people having the other surgery I want to tell them about my experiences and about another, better way.

Today I am fully recovered and running my own restaurant. I will forever remain thankful to Tal for all he has done.